Sports is like politics. People can twist the facts to fit whichever narrative they wish to be true. It is a branch of confirmation bias and general biases toward our favorite fighters and against those we dislike. Yes. The Greatest of All Time in any sport will always be debatable since it is in fact a matter of opinion. But this seven part series presents as lucid an argument for the best MMA fighter of all time that you will find anywhere on the Internet. And if you disagree, jump right in and let’s have an open debate. But just remember one thing….sports, like politics, may boil down to what one wants to believe….but it also does contain cold hard facts. This list is not about favorite or media darlings or the most popular fighters, it’s about objective facts. And by the end of this series, the evidence will show who is as factually close to being the greatest fighter of all time as possible.  The seven parts of this series are as follows:

Part 3: Explanation of the fifth greatest fighter of all time.

Part 4: Explanation of the fourth greatest fighter of all time.

Part 5: Explanation of the third greatest fighter of all time.

Part 6: Explanation of the second greatest fighter of all time.

Part 7: Explanation of the greatest MMA fighter of all time. 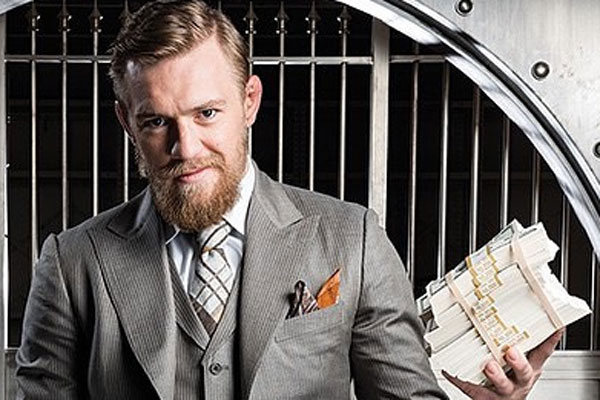 Stop it. Anyone who is saying or even asking if Conor McGregor is the GOAT now that he is the only man to hold two UFC titles at the same time: Please. Just stop it. Conor McGregor is not the GOAT and has a long, long way to go before he is even in the discussion.

First, let’s debunk the argument of “He did what nobody else did before, so he is automatically the greatest of all time.” By that logic, we are picking and choosing which achievement nobody has ever done before is most important. Anderson Silva defended his championship 10 times. That’s something no one has ever done before. Jon Jones has never truly lost a fight, even after being in nine title fights, that’s something that has never been done before. To essentially state that victories over Jose Aldo and Eddie Alvarez are more valuable than all the contenders the names on this list defeated shows either profound ignorance of the sport of MMA or a fanboy bias in favor of The Notorious One.

Look, McGregor….he’s awesome. I’m a fan, too. He is the most entertaining and charismatic personality the sport of MMA has ever seen. And who knows, if he keeps doing what he’s doing, he could end up being in this conversation. His striking-led by his deadly left hand, his precision, timing, and the brevity of his average fight time make it possible for McGregor to someday get to the top. But right now, he is equally as out of the conversation as Khabib Nurmagomedov. If we are to say what no one has done before, let’s look at a UFC Fighter who is 24-0 with 8 UFC wins. THAT’S NEVER BEEN DONE BEFORE. So if that’s all we need, something that has never been done before, then I guess Khabib is already the GOAT! But of course, Khabib still has a lot of proving to do at the top level, and guess what, Conor does too. But there is more good news for McGregor fanboys. Conor McGregor is already the best of all time at something. Conor McGregor is already the best CHALLENGER of all time. Here’s a guy who at his first crack, finished not one, but TWO different weight-class champions in dominant fashion, one of them in 13 seconds! Who so happened to be the greatest featherweight of all time! This 13-second victory over Aldo instantly begins if not solidifies the claim that McGregor is the greatest challenger of all time because in 13 seconds he managed to knock someone out AND simultaneously knock them out the running of being the GOAT. The only way Aldo can return to the running of being the GOAT is to avenge this loss and prove, or at least validate the argument, that it was a fluke, i.e. GSP/Matt Serra. Aldo knows this. Which is why he is obsessed with the Irishman. For McGregor to single-left-handedly knock someone out of the GOAT race is GCAT (Greatest Challenger of All Time) material!

Then, the cojones it takes to ask for and successfully achieve a second belt on top of that confirms him as the greatest challenger of all time. And hell, maybe even the greatest conqueror of all time. He has conquered two weight classes, the PPV market, and from the looks of things, the UFC operations itself. But it is one thing to be a great conqueror, and it is quite another to be a great ruler. THAT is the difference between the Conor McGregors and the Anderson Silvas, GSPs, and ironically, the Jose Aldos of the world. Those guys don’t just conquer, they rule. McGregor is not only yet to prove he can do this, but he hasn’t even proven a WILLINGNESS to do it. And that’s the guy we are putting in the same breath of the dominant champions that are to come on this list!? Is that really where we are, MMA pundits? What’s sad is that the question of whether Conor McGregor is the greatest of all time has been asked by actual MMA journalists! STOP IT! STOP POISONING THE INTELLECTUAL WELL OF THE SPORT! STOP IT! I expect that from the Irish and the McGregor fanboys, but as MMA experts, you must do better. Here is a guy who does not have ONE title defense. NOT ONE title defense, guys, and you are asking if he is the greatest of all time!? And it’s not even like he’s undefeated. He has THREE defeats, and one VERY RECENT defeat to a fighter who is 19 and freakin’ 11! JUST STOP IT.

McGregor refused to defend the featherweight title, which is understandable due to being unexpectedly tied up with Diaz and then winning the lightweight strap. But with two titles, comes twice the responsibility. If McGregor was going to opt for a vacation, just one defense of the featherweight title before doing so would have been just enough to keep him as a two-weight world champion in the real world, not the inflated one in his head which he resides in. This would also prevent the stigma that he now deserves of being a champion who never defended his title belt….not because of injury, but because of ego and self-admitted complacency.

And let’s make one thing clear. This vacation is about ego, not about paternal leave. If it were about paternity leave, firstly, McGregor wouldn’t have pulled a Bisping: being available for one scenario and unavailable in another. Much like how Michael Bisping claimed to be ready to fight GSP or Nick Diaz at UFC 206, only to immediately claim he was unable to compete after Jacare Souza became available, Conor McGregor sites paternity leave as the main reason for his vacation, and yet he goes out and gets a boxing license and names his price for a Floyd Mayweather bout. Additionally, he has made it clear that he won’t fight again until he receives stake in the company. If it were really about paternal leave, this extra condition would never be mentioned. Instead, he would just temporarily ride off earnestly into the sunset with the legitimacy of his paternity leave along with him—gripped around his gold-laden waist. But McGregor…he’s not hungry to EARN the right to be the GOAT. He would rather try to manipulate the public into thinking he’s at this level. And somehow, it seems to be working in many sects. This works well for him, as it continues to ensure bigger demand to see him compete again, and more lucrative payouts. Which is what it all really boils down to with the persona and the athlete of Conor McGregor:  The bottom line. Well, the bottom line in THIS particular discussion is that there shouldn’t even BE a bottom line because the damn conversation shouldn’t even begin among MMA pundits. Unless you can consider scathing indictments like this to be a conversation about it, in which case, converse away!

Even the greatest of conquerors may become complacent. They may find that they have conquered enough and then opt to take a break until something else catches their eye: more gold (instead of staying put long enough to protect the gold already seized), more money, more power, or all of the above. If you look at those incentives, you’ll notice how perfectly they fit who Conor McGregor is and what he stands for. Yes. Mr. McGregor is a conqueror. Just ask him. He’ll tell you. But he’s not a ruler. Rulers want to continue to remind the world who is king. Not through charismatic speeches that captivate the masses, but by imposing their will over any legitimate threat that dares challenge him.  As I said at the beginning of this post, I am a McGregor fan, too. But being a fan of someone does not mean refraining from calling B.S. when it presents itself. This is a distinction that the MMA media had better make and make quickly otherwise the enabling of McGregor’s  ego and his demands will continue to be the norm, and he will certainly exploit this public opinion and thereby freeze divisions and the flow of competition until all his demands are met. The MMA media continues to enable McGregor by neglecting to call out this nonsense, and they are also dumbing down the scholarship of the sport by even ASKING if he skips the five men who are about to be described on this list after having only two title fights in a 20-3 MMA career. For the love of the MMA gods, just stop it.

Stay tuned for Part 3 tomorrow where we begin to explain the inclusion AND placement of the five fighters on the GOAT list.