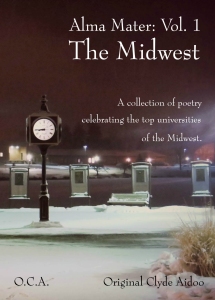 We’ve been called a ghost town…considered buried—
An underground Army.
We were left for dead in 1917 after our first game:
A crushing 145-0 defeat.
But our
Battle Rockets
Have exploded from the ground:
The Rockets of Toledo, Ohio—

Look out for the great
Torpedo.

Exploding through the Glass City and taking the shattered fragments and constructing a buoyant campus life as enchanting as the Toledo Museum of Art Glass Pavilion and the Beaux-Arts style that captures our Rockets and allows us to burst in an assembly of True Blue along with the animation of the Blue Crew to show that the University of Toledo has broken through. From the underground there is a tumbling sound—of an army over 20,000 strong that rallies the Rockets along.
The RMB is making noise in roll step to Funk on the Ottawa;
The band is the cadence of UT—marching aside the beautiful Rockettes in blue & gold glee.
The Rockettes are the first dance team in the nation,
Joining RMB to step in celebration
Of another victory coming for Toledo:

Since our 1917 crushing, we’ve attacked back with
Thirteen conference titles and five division titles,
The Toledo Rockets are hitting the MAC scene,
And our main target is Bowling Green.
Destructive like a lightweight Mark 46,
Hit the land target then a field goal
After 6.
In formations like the 27th Army Air Crew,
The Rockets shake the ground with UT’s Blue Crew.
This is a strong base with 20,000 in tow,
&
If this is considered underground…
Student foundations better
Look out below:

For the Midnight Blue and Gold Rockets:

Follow ClydeAidoo.com for sample poems from the Alma Mater and Art of Mind series. You can purchase the newly released Alma Mater Vol. 2: The Northeast, a poetic celebration of the top universities of the Northeast below.